How to Write a Movie Reflection Paper: Format and Examples 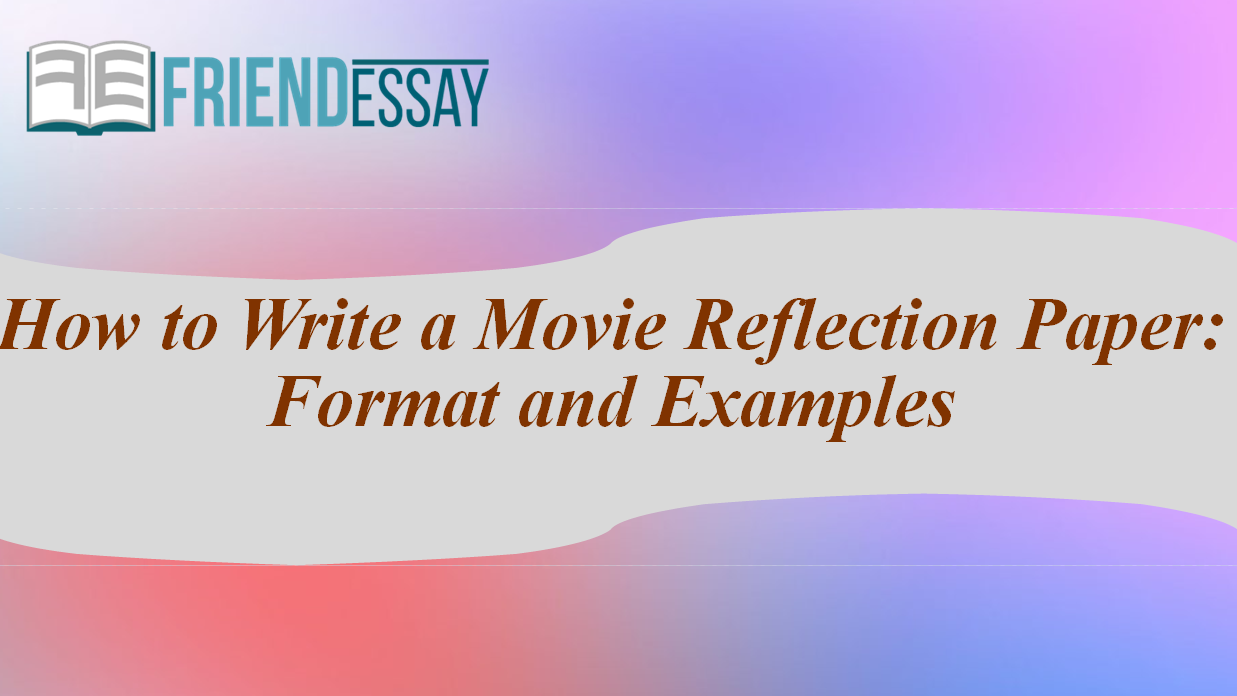 A movie reflection paper is a requirement for many film classes, usually at the end of each semester. While some professors might allow you to choose your own movie, most will assign one for you to watch and write about. This article will explain how to go about writing a great reflective paper on any given film.

What is a Movie Reflection Paper?

A Movie reflection paper is a common assignment given in colleges and universities. The purpose of this type of assignment is to allow the student the opportunity to view an assigned film, read supplemental material related to the film, and then write an academic response to what they have watched/read. A movie reflection paper requires that students form their own opinions about the subject matter at hand rather than simply summarizing it.

The other focuses more on analyzing themes within the text.

You should begin by choosing an appropriate topic idea. You can do this by asking yourself what parts of the film attracted your attention while watching it. Perhaps there are specific scenes or characters that caught your interest during the course of events on screen? If you find yourself unable to pick just one scene, try thinking in broader terms: What genre did the movie fall under? Which aspects of this genre proved particularly interesting? What themes ran throughout the film? What is the setting of the story? Make sure to consider these questions when choosing your topic, as they are important considerations that will help you write a great paper.

Once you have chosen your topic, you should start planning out exactly what points you want to make in this paper. For each point that you come up with, think about how it relates to your topic . Also consider how it connects to other points within the same section. The order in which you present your information is key here; try not to jump around too much or readers may become confused along the way. Organizing can be tricky at first but with enough readjusting and editing, you will reach an arrangement that makes sense!

Before writing any drafts, you should become as familiar as possible with the film. If it is a recently released movie or one that is popular in some way, you can be sure that there are plenty of resources available to assist you. You will probably only need to watch the movie once, but subsequent viewings may help your understanding and analysis if needed.

While watching, try to pay attention to dialogue since this is often what provides the most insight into characters’ personalities and motivations. Also consider how camera angles work within a certain scene – for example, does a character’s facial expression change when shot from a different angle? Think about sound effects and background music too. If you find yourself noticing things during multiple viewings, make note of them! These details may prove useful in your paper.

Once you have finished planning and watching the film, you can start writing using the format below!

A movie reflection paper should use specific examples from both films and outside sources (ie articles, interviews with cast members, other scholarly work) to support claims made within the text. Movies are not often useful outside sources by themselves because they are fiction.

Most movie reflection essays should be about four and five pages long, using APA formatted citations for references. These papers should also include an introduction paragraph that summarizes the main points of the paper as well as a conclusion paragraph that wraps everything up neatly.

How do you start a reflection paper? It’s a good idea to begin with an introduction; this should include background information about the movie (e.g., when it was made), followed by a thesis statement. The thesis is essentially your main point: what do you want to say about the film? This should be written in one or two sentences at most, depending on how much analysis is necessary for each topic point.

Try not to write too much in the introduction; go straight into talking about your points and supporting evidence.

Make sure to write a conclusion at the very end of your paper! It should summarize all points that you have made and should be kept short just like your introduction.

You can also write other parts throughout your paper, such as transitions between paragraphs or an “In General” section for each point if there is too much explanation to fit within one paragraph. Remember to keep your writing clear and easy to understand so as not to confuse readers with complicated sentences or elaborate vocabulary.

While it’s important to use strong evidence from the film, don’t be afraid of using outside sources (such as scholarly articles) to support your claims! The more accurate and well-thought out your paper is, the better you will do.

“The movie I watched today was “Inferno.” It is about a brilliant professor, Robert Langdon, who is trying to stop the plague of violence that has the potential to destroy humanity. The main antagonist in this movie is Bertrand Zobrist who seeks to end human population growth by creating an ongoing virus which he hoped would be spread through the city water system. Robert Langdon tried his best to locate where Zobrist had hidden his virus and prevent further outbreaks; however, he discovers that his efforts are not enough as the virus has already been released into the public water supply because another individual was able to steal it after Zobrist committed suicide (but before Langdon could find him).

I enjoyed watching this movie because it was very intense and action-packed. I also liked the main character, Robert Langdon, because he does not give up even when everything seems lost. In this movie, you can see that bad things happen to good people and that anyone can be a victim of evil in different forms. There are many life lessons to learn from movies like these such as the importance of preparation to avoid future disasters. For example, if someone sees suspicious activity going on or hears rumors about a person doing something wrong, they should immediately notify others about what they know rather than keeping it under wraps because sometimes that information could help save many lives.

“Inferno” is an interesting thriller which contains significant elements of mystery and suspense throughout the film. The producers did a great job of making the viewers feel like they were one of the characters in the movie. I would recommend this film to anyone who enjoys action and suspense movies with a good story line because you can never go wrong watching any film that has Robert Langdon in it. He is so witty and smart, which makes him even more fun and enjoyable to watch.”

“The movie, “Mary Poppins“, is one of the movies I watched as a child. It used to be my favorite. Watching it now that I am older, I noticed some differences between this version and the original book by P. L Travers.

The story starts out with Mary Poppins arriving at Number Seventeen Cherry Tree Lane in London to care for the Banks children Jane and Michael after their nanny quit without notice. Mr. and Mrs. Banks found themselves needing someone to look after their children while they were busy trying to run a bank during the depression era (1929). While taking care of them, she teaches them new concepts such as banking and even turned an down umbrella into an airplane once!

One of the best scenes in my mind is when Mary Poppins and Bert (the chimney sweep) fly on an umbrella though London. They flew all over, including to a circus and eventually landed at the bank where Mr. Banks works, right during his work time. After they land, Mary Poppins gives him some important advice about how to balance his job as a banker with his family life, which he needed very much.

“Mary Poppins” was first released in 1964 and later re-released on March 29th, 2013 with special effects added to it. I think that this movie had more adventure than the original book and had more excitement than just one nanny quitting without notice. Overall it was a fun movie to watch and I’d recommend it to anyone that likes light-hearted, funny movies.”

Keep in mind that there is no one way to write an excellent film reflection paper. It may take several drafts before you are satisfied with how it turns out, but don’t give up! As long as you remain true to the ultimate goal of analyzing a film critically, you should be able to convey your ideas well enough for any audience. If you follow these steps carefully and use good writing practices, you should have an excellent paper in no time at all! Would you like some essay writing assistance? It turns out that even great writers had someone else they could rely on to offer advice, editing and proofreading services! To save yourself some time and stress, make sure you ask for help from an experienced writer if you feel your writing skills are not up to the task. Here at FriendEssay, we offer a wide range of services that will definitely meet all your expectations.